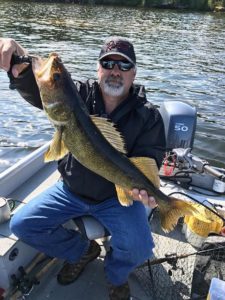 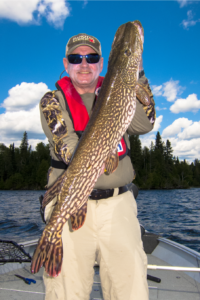 (what to expect, bring, prepare for, etc.)

Most people who know all about fishing in the Canadian Shield know that June is a wonderful time to fish. June is by far our busiest month of the summer. June is great fishing (actually the best fishing on some lakes) and great weather for the most part. But is June the BEST month to fish on Perrault Lake? We will let you decide. Steve’s favorite month is July. Jeremiah’s favorite month is August. Some guests swear by opening week in May. In the next 2 blogs we will tell you all about fishing in July and August. This one will be about July.

In our fishing reports we focus mainly on walleye. We normally write a little about bass and northern, but the focus is normally walleye as that is what most of our guests target. So, we will start with walleye. July walleyes start out around the 12 ft mark and by the end of the month we are catching them in the 18-20ft depth. Most of the month of July the conventional jig and a minnow technique works but is not the most efficient way to catch them. We have discovered over the past few years that using slip bobbers to keep the live bait 1-2 ft off of the bottom is the way to go. We have found that the best set up for this style of fishing is a medium power rod with 8-10lb monofilament line. You pretty much have to run mono for the bobber stop to work correctly. For the hook we use just a bare hook. No lead. The bait of choice is normally a leech for the month of July but it will also work with minnows and crawlers. There were a few days last year where guys were catching 100 walleyes or more per day in July using this method. The only downfall to this is when the wind picks up. When it gets windy the bobber blows by too quickly sometimes.

July bass fishing is also very fast. In early July there are still a handful of bass on the beds, which makes for some crazy fast fishing in super shallow water. As the month goes on the big females end up right with the walleyes on the tops of the rock reefs. That is when it gets fun. You set the hook and you don’t know if it is going to be a big walleye, northern, or a giant smallie. Once the bass move deep you have to rig up some more finesse style baits to bounce off of the rocks down deep.

July northern fishing can be a blast. You can catch large numbers of eater sized pike in the shallow weeds on spinner baits and top water baits. If you are into trophy hunting, the biggest pike on the lake normally are feeding all around the rock reefs close to where the walleyes and bass like to hang out. Bulldawgs and other similar baits can be very effective for big slimy northerns.

Now for what to expect for fishing conditions in July. July is overall the best month for weather. We don’t get a lot of really ugly windy type days. This is the worst month for pop up storms, but as long as you keep your eye out, Perrault Lake is small enough you can normally beat a storm back to camp. The good thing about pop up storms is that they are normally gone as fast as they show up. You can expect on average 70-80 degree days and 55-65 degree nights. People always ask which month is the worst for bugs. Well, there really isn’t one month better than another. Right after dark on some nights the mosquitos can get bad and other nights they are nowhere to be found.

July is an amazing tome to visit Sunset Country and Manotak Lodge. July 2019 is starting to fill up quickly, so if you read this and think that July is for you, then give us a call! Don’t forget to bring slip bobbers!!